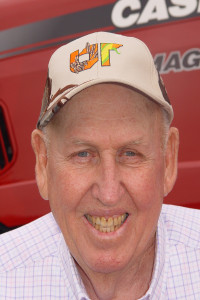 George Clay has maximized his production and has become an efficient row crop and beef producer who farms with two sons and only one employee.

A farmer for 57 years, Clay is from Pelham, Tenn. He grows high yielding crops and farms productive land.

As a result of his farming success, Clay has been selected as the 2015 Tennessee winner of the Swisher Sweets/Sunbelt Expo Southeastern Farmer of the Year award. He joins nine other state winners from the Southeast as finalists for the award. The overall winner will be announced on Tuesday, Oct. 20 at the Sunbelt Ag Expo farm show in Moultrie, Ga.

His beef herd consists of 115 cows on 235 acres of pasture. He sells 100 calves per year at an auction market when they weigh 600 pounds. He’s increasing the Angus blood in his herd, and he’s pleased with the bulls he buys at University of Tennessee Bull Test Station sales.

No-till and Roundup Ready technologies have made his farm more efficient. At least 90% of his crops are planted with conservation tillage. He plants corn at 29,000-31,000 seed per acre and soybeans at 140,000 seed per acre. “We plant soybeans with a drill and in rows,” says Clay. “When we use a row crop planter, we plant in 15- or 30-inch rows.”

He recently bought a new air planter to seed at uniform depths. He also uses global positioning systems. His well-maintained tractors are worth as much as he paid for them 20 years ago. Using dependable equipment avoids delays that can reduce yields and increase costs. Clay says it’s better to invest in newer equipment than to repair older equipment and risk costly downtime.

Soil samples taken every year or every other year show most of his soils are high or very high in phosphorus and potassium. He adds extra fertilizer to newly rented land testing low in nutrients.

Three years ago, he invested in earthmoving equipment and saved $25,000 to $30,000 in what he would have spent to hire land improvement work.

Marketing is important, and Clay concentrates on selling at prices that will increase his net worth. “I watch the markets closely,” he says, “and try to take advantage of strong cash prices or a good basis.”

“I generally try to forward contract half of my expected production, and sell the rest at harvest or I store the crops at a local elevator,” says Clay. On rented land, he typically farms on crop shares. If the landowner gets a third of the crop, Clay stores his two thirds. He says crop storage helps spread out payments and minimizes taxes owed on his crop income.

Clay remembers hand picking cotton and sweet potatoes as a child. His actual start in farming was rough. He got married after high school, managed a service station and started farming by buying feeder pigs. He lost a lot of money on the pigs, so he went to work for General Electric in Cleveland, Ohio. He returned to the farm in 1958 and was half owner of a milk cow and calf with his mother.

A major setback came in 1959 when his father died in a farm accident. At age 22, Clay took on the responsibility of supporting his own family plus his mother and three younger sisters. In 1961, he bought his first farm from his mother, but in 1962 he faced another adversity when a tornado hit the farm. The winds destroyed an apple orchard and many farm buildings but his family was still alive.

Early on, he borrowed from the Farmer’s Home Administration to keep the farm going. He persevered, paid his debts, and overcame other hardships such as drought, high interest rates, low prices, weeds and plant diseases. Clay is proud that he never missed or was late in making a loan payment.

His farm is now a success. The farm has been selected by University of Tennessee Extension to be the site of field days and farm demonstrations. Insect scouting schools have been held on his farm. He has hosted the University of Tennessee president, inner city youth from Nashville and a local leadership class. He has hosted seed variety trials, and his farm was selected for plots aimed at early detection of soybean rust.

Clay is a strong leader. He is president of Grundy County Farm Bureau. He helped establish a local cooperative and served as its president. He also organized a local Ruritan Club. He’s a member of a local cattlemen’s association. He sits on the Grundy County Soil Conservation District board, and was named Grundy County Soil Conservation Farmer of the Year. He helps plan the Middle Tennessee Grain Conference. He has been a voting delegate for the Tennessee Farmers Cooperative, and at many Farm Bureau conventions.

Edwene, his wife of 61 years, has been his strongest supporter. Edwene had her own successful career as a manager of industrial security for aerospace weapons and flight simulation at the Arnold Engineering Development Complex. “I didn’t retire. I just changed jobs when I came back to help George as the farm’s bookkeeper,” she says.

They have three adult sons, Eddie, Keith and Eric. Eddie and Eric work full time on the farm. Eddie is responsible for planting and harvesting. Eric specializes in spraying, buying crop inputs and marketing. Keith is a lending supervisor with USDA’s Farm Service Agency.

“I want my children and grandchildren to carry on the farm if that is their desire,” George says. “I have a plan in place for this to happen.”

The state coordinator of the Farmer of the Year award is Robert Burns, agricultural program dean for Extension in Tennessee. Clay was nominated for the honor by Dallas Manning, Extension area economist—farm management. Manning admires how Clay conserves the soil and how he is active in so many organizations.

As the Tennessee state winner of the Swisher Sweets/Sunbelt Expo award, Clay will now receive a $2,500 cash award and an expense paid trip to the Sunbelt Expo from Swisher International of Jacksonville, Fla., a $500 gift certificate from Southern States cooperative, the choice of either $1,000 in cottonseed or a $500 donation to a designated charity from PhytoGen, and a Columbia vest from Ivey’s Outdoor and Farm Supply.

He is now eligible for the $15,000 cash award that goes to the overall winner. Other prizes for the overall winner include the use of a Massey Ferguson tractor for a year from Massey Ferguson North America, another $500 gift certificate from Southern States, the choice of either another $1,000 in cottonseed or a second $500 donation to a designated charity from PhytoGen, and a Columbia jacket from Ivey’s Outdoor and Farm Supply.

A distinguished panel of judges will visit Clay’s farm and the farms of the other nine state finalists during the week of Aug. 10-14. The judges this year include John Woodruff, retired University of Georgia Extension agronomist from Tifton, Ga., who specialized in soybeans for many years; Clark Garland, longtime University of Tennessee Extension ag economist from Maryville, Tenn.; and farmer Thomas Porter, Jr., of Concord, N.C., who was the overall winner in 2011.